J.M. Smucker Co. has issued a warning against a small business in Minnesota that’s selling peanut butter and jelly sandwiches without a crust, according to a new report from the Star Tribune. The food giant alleges a crustless sandwich called Gallant Tiger infringes on the trademark protections of its Uncrustables brand.

Smucker insists that it doesn’t have any issue with other people selling peanut butter and jelly sandwiches, but the Fortune 500 company is claiming it holds a trademark on a “round crustless design” and the packaging photo choice that shows a bite taken out of the sandwich.

As you can see from the side-by-side above, the idea that customers might confuse the two brands seems a bit far-fetched.

The Gallant Tiger sandwich brand was started by Kamal Mohamed, who, along with his family, owns the Nashville Coop food company in St. Paul. Mohamed also owns a restaurant called Stepchld in Northeast Minneapolis.

Mohamed recently received a letter from Smucker demanding he “permanently cease and desist from manufacturing, marketing, sales, and distribution” of the Gallant Tiger brand sandwiches.

“We have no issue with others in the marketplace selling prepackaged PB&J sandwiches, but Gallant Tiger’s use of the identical round crustless design and images of a round crustless sandwich with a bite taken out creates a likelihood of consumer confusion and causes harm to our goodwill in our Trademark,” said the letter, according to the Star Tribune.

Smucker manufactures roughly 1 billion of its round sandwiches every year, according to the Star Tribune, raking in about $500 million, while only a few hundred Gallant Tiger sandwiches are made each week and distributed largely to coffee shops in the Twin Cities. Gallant Tiger, which takes its name from the mascot at South High in Minneapolis where Mohamed went to school, according to Racket MN, is very conscious of the fact that it’s taking on a large company with more resources.

But Mohamed’s lawyer sent a letter back to the food giant explaining, “There are not very many shapes that a sandwich can be made into.”

Mohamed told the Star Tribune that his sandwiches sell for $5.75 and are made from different ingredients, an arguably much more upscale product than the Uncrustables you’d find at any grocery store.

“We’re not in any way trying to say that we are a competitor,” Mohamed told the Star Tribune.

“From a traditional trademark perspective, a customer would not mistake the two, because our price point is different, our packaging is different and our quality of ingredients is also significantly different. In fact, we’re twice as expensive as the market leader. So if somebody saw us in store side by side, why wouldn’t you just go with their product?” Mohamed asked.

Copyright law does not cover recipes, but other intellectual property protections like trademarks can cover specific design choices used to sell products. Patents can also be granted for packaging choices, like Coca-Cola’s so-called “contour bottle.” However, not all countries will agree on when a trademark or patent are distinctive enough to warrant protection, especially in food marketing. Turning back to Coca-Cola’s bottle, the European Union ruled in 2016 that the Coke bottle wasn’t distinctive enough to warrant its own intellectual property protections in Europe.

Smucker did not respond to questions emailed overnight. Gizmodo will update this article if we hear back.

Again, it seems wildly implausible that the average consumer would confuse the two brands, but we’re not trademark lawyers. If someone can really get a trademark for a round crustless sandwich, it might be time we re-evaluate the role of trademark law in society. Because while these kinds of intellectual property protections are important for making sure consumers get what they’re paying for, does anyone really think people might confuse these two products? Get smucked. 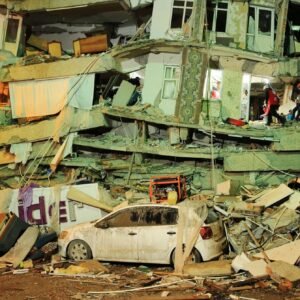 Earthquake Aftershocks May Rock Turkey and Syria for Months, Even Years

Early Monday morning, a magnitude 7.8 earthquake ripped through Turkey and Syria, followed nine hours later by a 7.5 aftershock. The death toll stands at more than 3,800, and rescuers…